A friend generously introduced me to this giant old madrone tree outside the town of Fairfax, CA, by a friend whom I know loves trees as much as I do, in her own unique way.  She ends almost every day by spending quiet time outside, visiting our mutual friends, the trees.

I then invited a few more tree fans to come play with this old Mama tree.  (fyi, I don’t really think of trees as having gender, I just imagine and project my human conceptions onto things, and trees, as many people do.)

As usual with a free TreeSpirit photo event, some people who said they’d participate did not, and others who never said they were coming just appeared, including one man who’d just flown in the night before from Scotland. 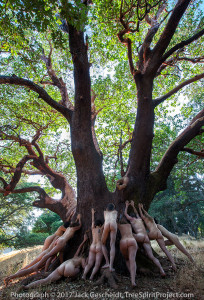 As did a woman who struck me as the forest faerie type — and was — but also turned out to work as an audio editor in the radio world.  As I like to say, because it’s been my experience, open-hearted and unabashed tree lovers are everywhere — they walk among us!

We all played together in a TreeSpirited fashion, honoring this being, far older than any of us, with our loving presence and appreciation.  The way so many humans used to for thousands of years.  And still can.