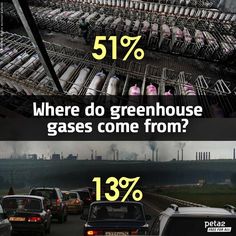 Yes, you read that right.  Animal factories making burgers and milk and other animal products pollute the atmosphere with an estimated 51% of global GHGs (greenhouse gasses).  That’s more than all the world’s cars, trucks, buses, ships, and planes COMBINED = 13% of global GHGs.

The cattle, pig and poultry industries — eating cows, milk, pigs, chickens and eggs — are the #1 contributor to planetary heating, the climate crisis.

Read the Washington D.C.-based Worldwatch Institute report detailing how these industries of — including the integral industries of fossil fuel production and transportation enmeshed with animal factories — generate over 1/2 — 51% — of the world’s greenhouse gases (GHGs) responsible for human-cause global heating.  Animal factories producing meat and milkl for human consumption are the #1 cause of anthropogenic climate change — as well as ocean pollution and global deforestation, especially in the crucial Amazon being destroyed to graze cattle and grow GMO-soy and GMO-corn crops to feed them.

A much lower, oft-cited estimate by the United Nations FAO (Food & Agriculture Organization) estimated industrial animal “farming” accounts for 18% of global GHGs, but this figure was arrived at by using a much lower, and demonstrably inaccurate number of animals, among other discrepancies delineated in the Worldwatch Report.  Even still, at only 18%, animal factories would still be the #1 cause of anthropogenic climate change and global deforestation.

CLICK IMAGE BELOW to read PDF of Worldwatch report. 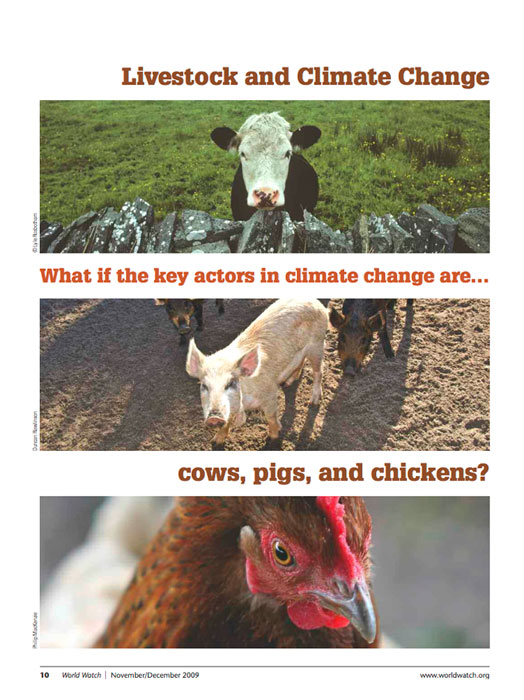 READ an analysis of the Worldwatch Report, comparing it to the United Nation’s estimates: why the 51% GHGs from animal factories figure is more accurate than the oft-cited United Nations FAO (Food & Agriculture Organization) estimate of 18%.  Nevertheless, both studies rank “animal agriculture” emissions as greater than all the world’s planes, trains, automobiles, buses, trucks and ships emissions combined.

See the biggest single action you can take, every day, to reduce your climate impact: