BELOW, read one man journals his extraordinary experience in the TreeSpirit photograph, “Oak Garden“

READ MORE TESTIMONIALS of what it’s like to play among trees with like-minded, kind-hearted tree lovers.

Most photos that include nudes are about nudes – everything else is just an accessory.  In Jack’s TreeSpirit photos, the nudes are the accessories.  In some you may not even notice the nudes at first.  And in all of them you could subtract the nudes and still have a beautiful photograph.  His photographs inspired me because of the spiritual messages contained in them.

As an amateur photographer I wanted to know how he works, how he organizes his shoots, and where in the world does he get these beautiful models.  When a friend forwarded me an email from Jack inviting people to participate in a shoot, I was ecstatic.  I had to be there!  I even rescheduled my daughter’s birthday party by a week to make it.

On Sunday the 25th of September (2005) I was at the appointed meeting place in Golden Gate Park (in San Francisco) over an hour in advance, which allowed me to relax a bit while watching the crowds enjoying a beautiful day.  Eventually other of Jack’s participants showed up, and we quickly got to know one another.  In talking to the participants a few things surprised me: there were three times as many women as men; there was a great span of ages; most people said they had never done anything like this before; and none of them said they were nudists.  Many, if not most of them, like me didn’t know Jack personally, only through his art. 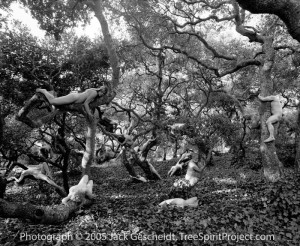 When we joined Jack at the designated spot he was all set up and waiting for us.  He himself proved to be a very nice young man, very warm and accompanied by his equally warm assistant (and girlfriend) Amy.  I know many artists and most of them are self-absorbed so that’s pretty much what I expected, but the opposite was the case.  I was especially surprised how appreciative Jack was for every one of the volunteers, shaking our hands with both of his.  He hugged some of his old friends and was visibly delighted to see them.  He told me later that he considers “a TreeSpirit photo an exchange, that none of the photos could be made without the trust and openheartedness of the participants.”  In return, he “is the excuse to have an unusual and fun experience in the woods with fellow nature-lovers” like him.

This time the subject of his picture was a downward sloping grove of oaks.  Jack told us to take our places among the trees with our clothes on, to keep warm and to not attract attention.  He told us that if any passerby complains or if authorities show up that he would deal with that and not to worry.  We all selected a branch or a tree and made ourselves comfortable.  Some people climbed trees with the skill and agility of monkeys, some with fear and trembling.  Jack was definitely in the monkeys group.  He would climb some trees to see if there was a good spot for someone or not.  There was a great amount of camaraderie among the volunteers and everybody got the help they needed to scale the first branch or get properly positioned.  Some folks did not want to climb and positioned themselves on the ground.  Jack said that he did not want to choreograph people and he let them assume positions that they wanted.  He said that he just wanted for people to feel one with the trees, to get close to them, to commune with them.  To this end when he saw someone in an awkward and uncomfortable position he would suggest to him or her a better one.

That took a while, but eventually all 20 of us were placed, relaxed and communing.  He asked us to disrobe and come back to our places in the trees.  Some folks were so high on the trees they just dropped their clothes down.  Others needed assistance to get back to their perches and some of the naked volunteers became ladders for others.  That was quite a sight!  I looked around and was amazed by the beauty of what I saw.  Next to me was the wonderful Darshana from the Meridian Institute. If you ever meet her, ask her about the meaning of her name.  One young lady was reclined on a nearly horizontal branch with her long blonde hair cascading to the ground.  One muscular young man looked like a part of a tree, another lady looked like a fairy… There was a gorgeous butt hanging nearly over me like a ripe fruit… I was aching to use my own camera and was so sorry that there would only be one picture from this enchanted grove.  Every angle offered completely new and beautiful sights. O h, how I wanted to take pictures!

Once we all took our positions and settled down Jack started shooting.  No flash, no lamps, just natural light.  It was a bit dark in that grove by then, the setting sun occasionally throwing patches of bright light among us.  I could hear the shutter of Jack’s camera going off each time.  We all tried to be motionless despite the cold and mosquitoes.  Note to self for the next shoot: bring mosquito repellent!  While shooting, Jack was giving us encouragement to accept the cold, stay motionless and to feel the trees.

I lay face down on a nearly horizontal trunk close to the ground.  It was overgrown with ivy and I put my cheek (of my FACE!) on the bark.  I was super excited about the whole thing but suddenly I relaxed and experienced an amazing thing that would be hard to describe.  I suddenly “felt” the tree.  Something that I think could not happen if I had my clothes on.  I felt a living thing, as if I was holding on to an arm or leg of a gentle giant.  I was spiritually aware of the juices moving in that limb, of cells dividing, of its miniscule growth.  The feeling was so sudden and so strong that I nearly jumped off my host.  Then I kind of snuggled up stronger.  Eventually I became uncomfortable and needed to change positions and I heard Jack saying that this is OK to do.

When he was done I witnessed another incredible spectacle: all the naked people coming down from the trees and leaving the grove.  It was an incredible sight to see naked people helping one another off the branches.  Jack showed everyone the little preview picture on a Canon digital camera (he sometimes uses this in addition to the medium format film camera he uses to make the TreeSpirit photographs).  Jack told us that as a thank you we all would receive a print of today’s picture (we had all signed a model release form beforehand).  There was some socializing and many people wanted to talk to Jack.  He accommodated all and did not leave until everyone else did.

This was an unforgettable experience for me!  I only wish someone took a picture of me taking Brucie off the tree and then carrying her on my shoulders to the trail, both of us nude!

READ MORE TESTIMONIALS of what it’s like to play among trees with like-minded, kind-hearted tree lovers.