“Regenerative” Ranching is more BS. And methane. Lots of methane.

…are various names for grazing cattle in ways being championed by the cattle industry as fixes for the ecological damage large-scale cattle operations do to soil, waterways, and atmosphere. But these offer at best minimal, short-lived mitigation to the ecological, atmospheric and climate damage done by millions of cows we raise for meat and milk.

Far more effective (about 4x) is to switch humans to a plant-based diet. So-called “free-ranging” cows require, degrade and pollute MORE land. Reducing their numbers reduces land damage, but requires more land, and then won’t feed 340,000,000 Americans appetite for meat and milk.  In summary, “It’s not the how, it’s the cow.”

90 million U.S. cows simply produce too much methane — and accelerate global warming.  Big Ag’s public relations pushback, as with Big Tobacco’s and Big Oil’s, is to increasingly, in desperation, muddy the waters and even deny atmospheric, environmental and climate science.

“Grass-fed beef” is a branding exercise, not a climate solution. 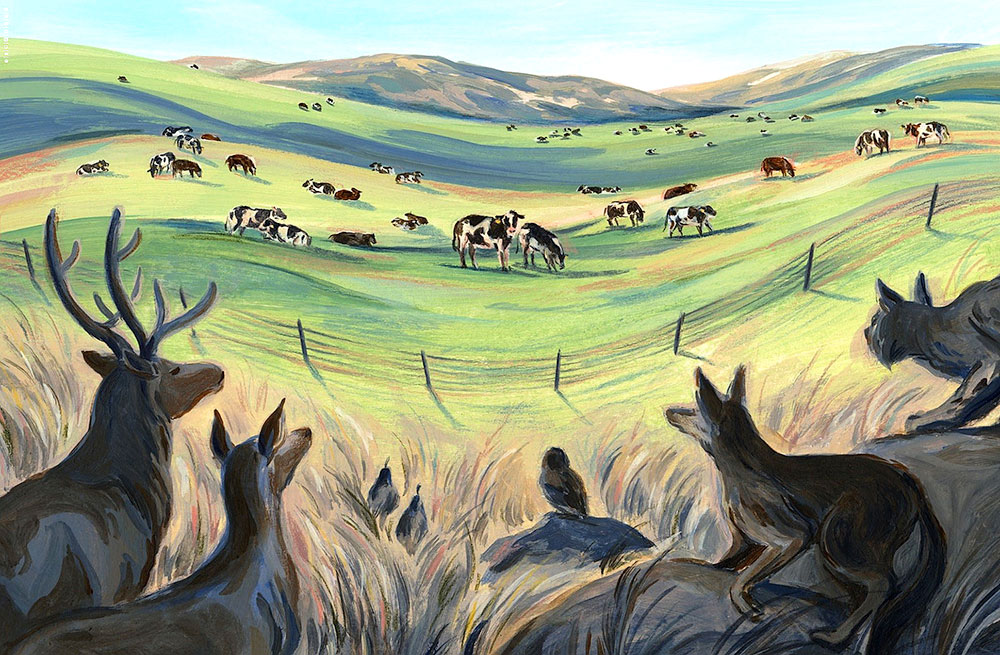 “…regenerative” beef currently represents not so much a scalable climate solution as a way for those who can afford to do so to purchase indulgences for their continued meat consumption.  The owners of grass-fed beef ventures may market their premium-priced products as a way out of the hellscape of Western capitalistic agriculture.  But absent much broader societal changes, regenerative agriculture’s anti-industrial rhetoric is more of a class marker than a call to revolution.

In 2017, an exhaustive, 127-page study led by scholars at Oxford found that grass-fed livestock “does not offer a significant solution to climate change as only under very specific conditions can they help sequester carbon. This sequestering of carbon is even then small, time-limited, reversible and substantially outweighed by the greenhouse gas emissions these grazing animals generate.”

Eat More Meat and Save the World: the Latest Implausible Farming Miracle 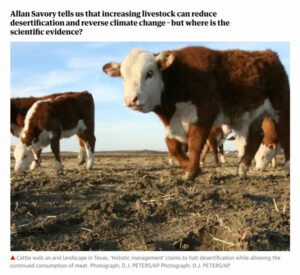 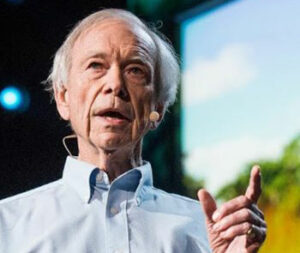 A large number of academic papers have been published in response to his [Allan Savory’s] claims, testing them by means of experimental and comparative studies. The conclusion, overwhelmingly, is that his [Savory’s] statements are not supported by empirical evidence and experimental work, and that in crucial respects his techniques do more harm than good.

A new review of experimental results, in the journal Agricultural Systems, has this to say about Savory’s claims that his Intensive Rotational Grazing (IRG) can regenerate grassland:

“The vast majority of experimental evidence does not support claims of enhanced ecological benefits in IRG compared to other grazing strategies, including the capacity to increase storage of soil organic carbon … IRG has been rigorously evaluated, primarily in the US, by numerous investigators at multiple locations and in a wide range of precipitation zones over a period of several decades. Collectively, these experimental results clearly indicate that IRG does not increase plant or animal production, or improve plant community composition, or benefit soil surface hydrology compared to other grazing strategies

Another review article, in the International Journal of Biodiversity, found that grazing by livestock in arid places is more likely to destroy grass and other vegetation than to protect it:

“Published comparisons of grazed and ungrazed lands in the western US have found that rested sites have larger and more dense grasses, fewer weedy forbs and shrubs, higher biodiversity, higher productivity, less bare ground, and better water infiltration than nearby grazed sites.

As for the claim that holistic management can reverse the build-up of carbon dioxide in the atmosphere, according to RealClimate.org, he’s wrong by orders of magnitude. Just to balance current carbon emissions, the uptake of carbon by all the world’s vegetation (not only grasslands) would have to triple. But Savory says he can go beyond that, and his technique can bring atmospheric carbon “back to pre-industrial levels”. As RealClimate puts it: “science tells us that this claim is simply not reasonable.”

Far from grazing helping to store carbon, holistic management seems to have the opposite effect: the evidence strongly suggests that livestock reduce carbon storage rather than raising it. In terms of total greenhouse gas emissions, the intensive grazing of cattle on grasslands can be even worse than producing them in feedlots. 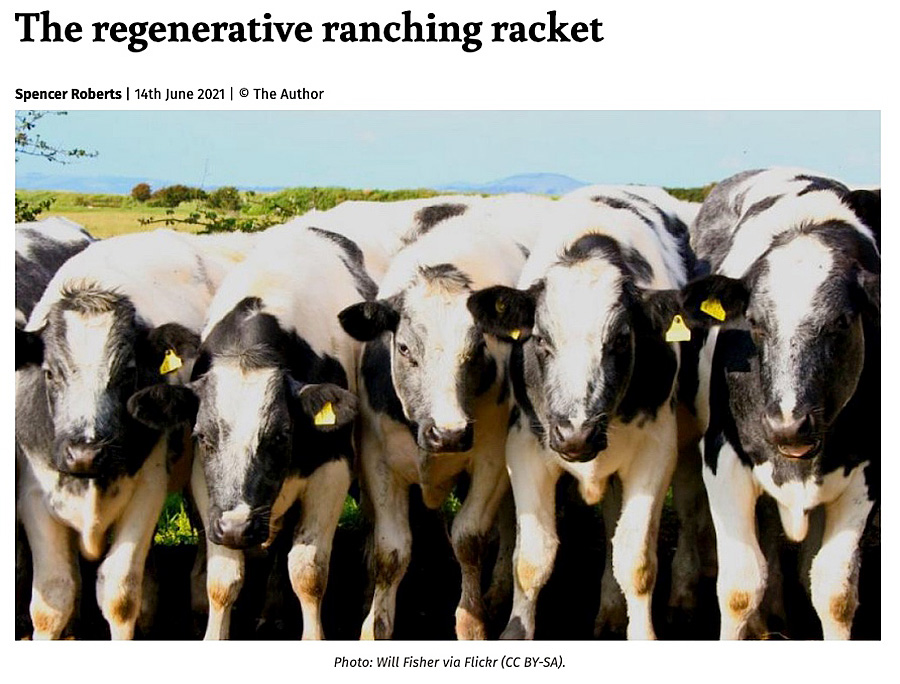 In recent years, cattle ranching has been championed as everything from a solution to industrial agriculture, soil degradation, and even climate change. But so-called “regenerative ranching” isn’t all it’s cracked up to be.

…emitting greenhouse gases is far from the only damaging environmental side-effect of ranching. In the United States alone, studies have shown that it vectors the spread of invasive plants, endangering endemic flora. It accelerates the erosion of stream banks, clouding waterways and propagating harmful algal and bacterial growth.

It [ranching] desiccates streams, groundwater, and aquifers, diverting them into pastures, stock tanks, and feed crops. It encloses vast expanses of land within fencing, entangling wildlife and inhibiting migration of native grazers like elk, pronghorn, and bison.

It [ranching] entails the trapping, hunting, and poisoning of predators and “pests”, such as prairie dogs, coyotes, and wolves. It promotes the wholesale destruction of ecosystems such as sagebrush and pinyon-juniper forests by methods such as bulldozing, chaining, and even napalm air strikes to create more range land.

It occupies an estimated 60% of global agricultural land while providing only 2% of calories consumed worldwide. And although the regenerative ranching movement posits itself as an alternative to the industrial feedlot system associated with many of these repercussions, virtually all grass-fed cattle in the United States spend the final quarter or more of their life in a concentrated animal feeding operation.

The proliferation of industry messaging has been less successful in altering the scientific consensus, but has provided an orchard of alternative narratives, ripe for cherry-picking.

Better management of grass-fed livestock, while worthwhile in and of itself, does not offer a significant solution to climate change as only under very specific conditions can they help sequester carbon. This sequestering of carbon is even then small, time-limited, reversible and substantially outweighed by the greenhouse gas emissions these grazing animals generate.

The godfather of regenerative ranching, however, is a man named Allan Savory. Savory rose to prominence in the United States after a breakout TED talk, a media venture by CNN founder and ranching tycoon Ted Turner. Savory now has a consulting firm, an online school, and a farm certification. The consensus among ecologists—and even many ranching scientists—regards him [Savory] as a crank, but he compares himself to Galileo, claiming that it’s impossible for peers to review his methods of holistic range management. Regardless, his theories are flattering to business and convenient to consumers, which means they still find plenty of advocates in media.

Agribusiness not only funds an increasingly significant proportion of agricultural research in the United States, but a number of state-mandated marketing programs. In 1985, during the Reagan administration’s campaign to fleece federal lands for privatized grazing, congress passed the Beef Promotion and Research Act, placing a small tax on cattle sales to fund industry advertising in public spaces, which has grown over the years with the expansion of the industry.

…ranching industry infiltration into the academy is vast, including on-campus slaughterhouses built with industry funding and parallel institutions such as range ecology and animal sciences, which help to avoid peer scrutiny of industry scientists’ business-related priorities in conventional ecology and zoology departments.

…the ranching industry’s extensive public relations strategies also help to promote ranching pseudoscience in the more progressive corners of popular culture. Ranching has been promoted as a means of combatting climate change in media outlets such as The Nation, The Guardian, Scientific American, and CNN.

The scientific reality is that the concept of sustainable carbon-negative ranching is little more than meat marketing mythology.

In short, Savory’s basic theme is a variation on what has been called “short duration grazing” or “mob grazing.”  Under such scenarios livestock, typically cattle are tightly herded through a confined pasture (small pastures) or rangeland so that the animals cannot be selective in their choice of food. Then the livestock are moved rapidly on to the next grazing area, and the previously grazed area is rested from livestock for an extended period of time, so the plants can recover and regrow. Savory’s advocacy for monitoring and careful attention to livestock plant utilization is consistent with well-established range management principles.

However, many of his observations about animal behavior, plant ecology, evolutionary history and carbon storage are well outside the accepted scientific consensus. And these ideas can lead to damaged ecosystems and in the case of his ideas about livestock and global warming may actually be counterproductive—leading to greater GHG emissions if implemented according to his ideas.

Currently, non-native livestock grazing is authorized on approximately 250 million acres of public lands administered by the U.S Forest Service and Bureau of Land Management. Private livestock corporations pay just $1.35 per month to graze a cow-calf pair, or five sheep, on these federal public lands. The grazing comes at a tremendous cost to wildlife habitat, threatened and endangered species, and clean water.

Livestock grazing is a threat to biodiversity and a contributor to the climate crisis—it’s an absolute farce for the Biden administration to be including grazed public lands as a contributor to critical 30×30 conservation goals. 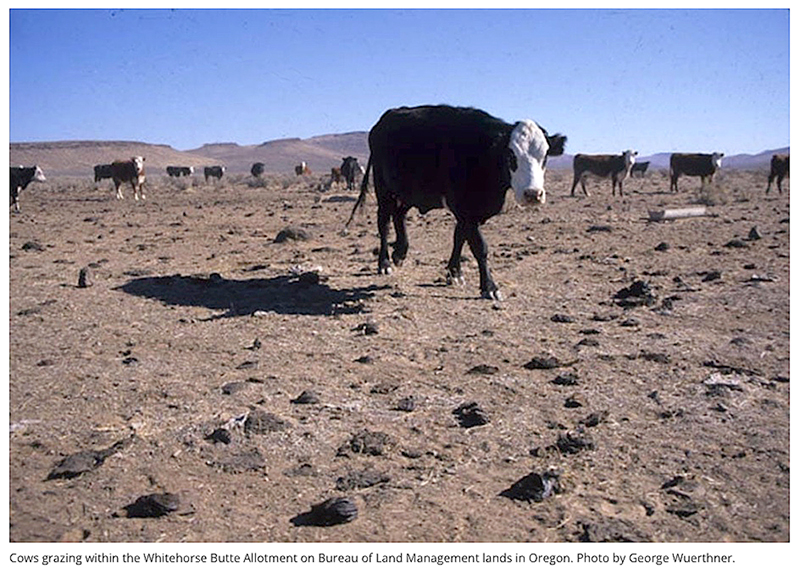 America has a manure problem, and the miracle solution being touted isn’t all that it seems 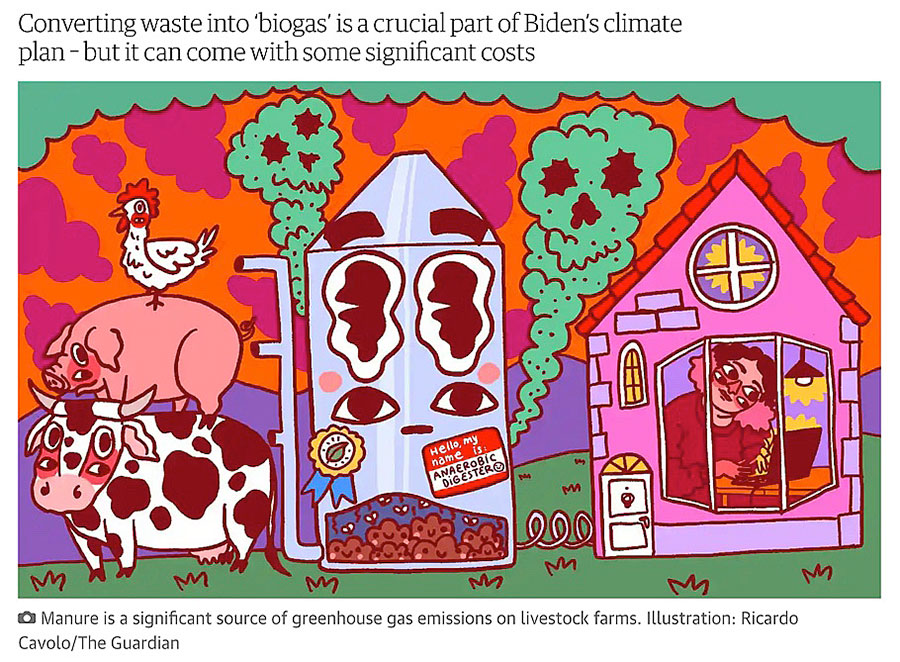 Tyler Lobdell, an attorney with Food and Water Watch, says his group is particularly concerned that the rise in [methane] digesters only serves to further entrench both natural gas and factory farm production – two industries that are already notoriously difficult to regulate. “We’re marrying these two industries in such a way that it will become very difficult to advocate for change,” he says.

Depending on how they’re used, anaerobic digesters may also not be as effective at curbing air and water pollution as they are on paper. “We already don’t enforce regulations on the books for air and water in CAFOs,” says David Cwiertny, a professor of engineering and environmental policy at the University of Iowa, referring to concentrated animal feeding operations. “I’m hard pressed to believe we’ll do it for digesters.” 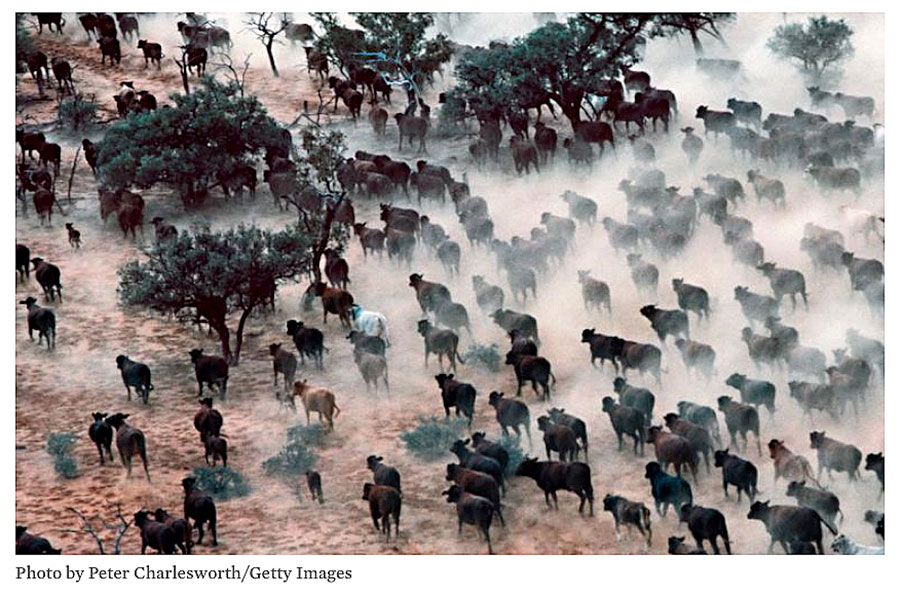 Since that initial study was conducted, Savory has faced a new wave of scrutiny. A group of U.S.-based rangeland scientists, led by David Briske, a professor in the Department of Ecosystem Science and Management at Texas A&M University, stated flatly that the Savory method “can not green deserts or reverse climate change.” Savory’s claims “are not only unsupported by scientific information, but they are often in direct conflict with it.” Briske’s study, published in the journal of the Society for Range Management in 2013, concluded: “We find all of Mr. Savory’s major claims to be unfounded.”

The Briske team found that Savory misrepresented the photos of landscapes he presents as evidence of the alleged desertifying effect of removing cattle. One of the photo series he often uses features Chaco Culture National Historical Park in New Mexico. But the land, the Briske report said, was not desertified from lack of cattle. Instead, the landscape was slowly recovering from decades of abusive overgrazing. (I emailed Briske for an interview, but he declined to talk. “Frankly, I have grown weary of the grandiose and unsubstantiated claims of Mr. Savory,” Briske replied.)

Andres Cibils, a professor of range science at New Mexico State University, looked at Savory’s claims of rangeland regeneration in Patagonia, among the highlights of the [Savory] TED Talk. “In the case of Patagonia,” Cibils told me, “there are no credible data to support Savory’s success assertions.”

According to some researchers, Savory appears to misunderstand the intricate processes of soil carbon sequestration and nutrient cycling. I called up Kelsey Brewer, a one-time organic farmer who is now a staff researcher at the University of California, Davis, and who is studying whether livestock grazing alone can improve sequestration. “Carbon is central to his argument,” Brewer said. “But he [Savory] gives no specifics in his TED Talk. And no data. He makes claims, and shows pictures.”