What does the USDA’s Wildlife Services do?

Kills wild animals. Millions of them.
With YOUR tax dollars.

You’ve likely never heard of Wildlife Services, a secretive division of the USDA (U.S. Department of Agriculture).  Its Orwellian name belies what it does: the “service” Wildlife Services provides wildlife is killing them. Over a million wild animals, every year.

Slaughter is “service.” Killing is “humane.”  War is Peace. And taxpayer funded.

This multimillion-dollar federal wildlife-killing program targets bears, wolves, coyotes (LOTS of coyotes), mt. lions, foxes, bobcats, river otters, birds and other wild animals that do what all wild animals do: eat other animals in the outdoors.

But if their prey is a pig, a chicken or one of the tens of thousands of privately owned cattle-for-profit allowed to graze on public land, then the wild predator can be targeted for death.

Even if the wild animal is living and roaming and hunting on land belonging to you, the U.S. public.  About 1/2 of America’s public land — millions of acres — is opened to cattle grazing, at below market rates, subsidized by U.S. taxpayers.

The wealthy — and therefore politically powerful agriculture industry ranchers — call up Wildlife Services and have them do their dirty, secretive work, also paid for by an uninformed public. 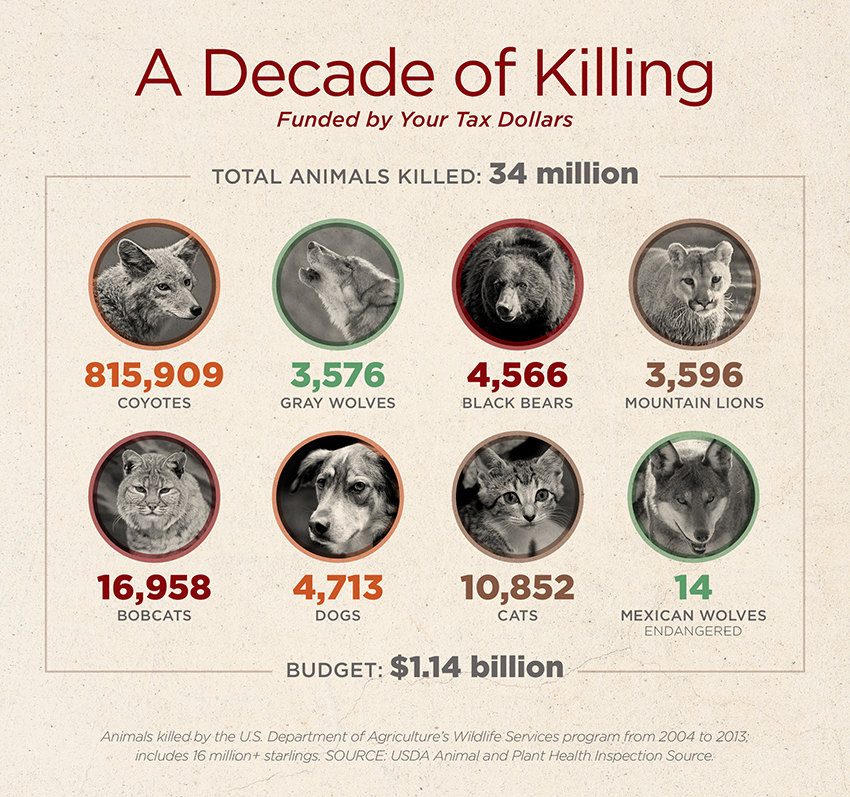 The award-winning documentary film Jane Goodall wants millions to see. Three former federal agents and a Congressman blow the whistle on Wildlife Services — a barbaric, wasteful and Orwellian-named agency of the USDA most Americans have never heard of.

Learn more and support our efforts to end this American war on wildlife: http://www.predatordefense.org/exposed 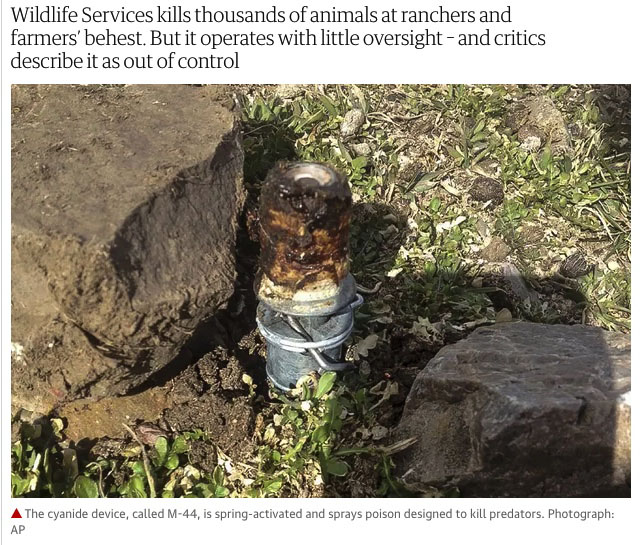 The secretive government agency places ‘cyanide bombs’ across the U.S.

Wildlife Services kills thousands of animals at ranchers and farmers’ behest. But operates with little oversight.  Critics describe it as out of control:

While playing in the woods behind the family home, Canyon Mansfield, 14 years old, and Kasey, his Labrador Retriever, had stumbled upon a strange device that sprayed them both in the face with a dose of of sodium cyanide. The boy managed to quickly clean the poison out of his eyes, but the dog collapsed and started convulsing…

“The United States government put a cyanide bomb 350ft from my house, and killed my dog and poisoned my child,” said Theresa Mansfield, Canyon’s mother.

If you haven’t heard of the US agency that placed the bomb, you’re not alone.

Sometimes its agents shoot wolves or coyotes from helicopters.  Sometimes they employ leg traps and snares.  And sometimes they place poison devices on public and private land.  M-44s, also known as “cyanide bombs”, are baited and spring-loaded tubes that spray an orange plume of cyanide powder when triggered.

National Press Club 2018 Winner – Federal wildlife agents set poison traps which indiscriminately kill thousands of “predators” like coyotes.  This is the fatal story of a boy & his dog — and all the other collateral damage this program brings to the West.

Wildlife Services’ killing programs have countless critics, including these orgs: 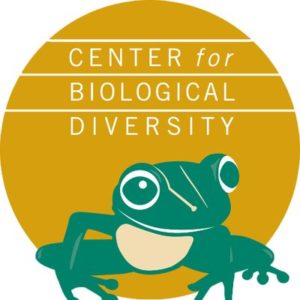 THE CENTER FOR BIOLOGICAL DIVERSITY: “The Department of Agriculture (USDA) needs to get out of the wildlife-slaughter business,” said Collette Adkins, biologist & attorney at the Center for Biological Diversity. “There’s just no scientific basis for continuing to shoot, poison and strangle well over a million animals every year. Even endangered species and pets are killed by mistake, collateral damage.”

Agency insider whistleblowers say the figures underestimate the actual number of animals killed because Wildlife Services kills many more animals than it reports. 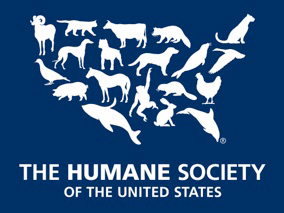 THE AMERICAN HUMANE SOCIETY: Most Americans do not even know Wildlife Services exists, much less that taxpayer dollars are used to support its lethal programs. This federal program paradoxically conducts cutting-edge research into better and more humane techniques in wildlife control while embracing outdated and inhumane approaches in its field operations. Wildlife Services is wholly out of touch with modern conservation values and lacks the transparency Americans demand of their government agencies. It has failed to keep pace with the American public’s demand that wild animals, even when regarded as pests, should be dealt with humanely and that the welfare of wild animals be weighed as a first-order concern in any control programs.

The stated mission of Wildlife Services is to provide “Federal leadership and expertise to resolve wildlife conflicts to allow people and wildlife to coexist” (USDA Wildlife Services 2009). Yet for more than a century this federal program has specialized in only one type of wildlife conflict resolution—killing.  Many millions of animals from dozens of species, including endangered and threatened, target and non-target species, have fallen to the poisons, traps, and other lethal instruments this program employs.

Its operations damage entire ecosystems by targeting keystone and umbrella species such as wolves, prairie dogs, and beavers and unbalance wildlife community structure by decimating entire populations of others, such as coyotes. 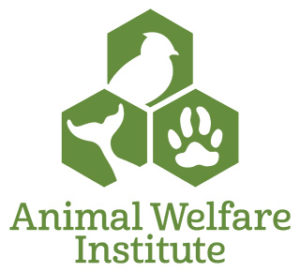 Wildlife Services: A Killing Program Out of Control

A little-known US Department of Agriculture (USDA) program is using brutal methods and taxpayer dollars to indiscriminately kill wildlife across the United States. This program, ironically entitled Wildlife Services (WS), kills approximately 5 million animals each year in the name of “managing problems caused by wildlife.” [A larger estimate based on reports beyond what WS itself reports. – Ed.] It operates with notoriously little transparency, refusing the public access to records documenting many of its killing activities. The program engages in myriad cruel practices, including steel-jaw leg hold trapping, poisoning, and aerial shooting—at a substantial cost to taxpayers.

KILLS INDISCRIMINATELY  WS has killed more than 50,000 non-target animals representing over 150 species since 2000, including endangered species and family pets.1 In addition, the intentional killing of targeted species often is not limited to those animals who have actually depredated livestock or game.

WASTES TAX DOLLARS   Most of the killings carried out by Wildlife Services are not only brutal and unnecessary—but expensive. The program’s annual budget exceeds $100 million, about half of which is drawn from federal funds. More disturbing is the fact that a portion of WS funding comes from private sources with more leverage than taxpayers in determining the program’s priorities, methods, and actions.

THREATENS PUBLIC SAFETY  WS employs dangerous, nonselective poisons that can be lethal to humans. Sodium cyanide devices known as M-44s have poisoned nontarget wildlife, family dogs, and even humans,5 while Compound 1080—a poison that causes prolonged suffering and death, and to which there is no antidote—is a known homeland security risk.

LACKS ACCOUNTABILITY  WS is widely condemned for lacking transparency and accountability in its practices and protocols. For example, investigations7 have revealed a disturbing trend of “shoot, shovel and shut up” for non-target animals—including threatened and endangered species—who are killed and not reported. In addition, because WS fails to verify all livestock losses and allows ranchers to self-report such losses, statistics produced by WS regarding livestock depredation are dubious at best and raise serious questions about the legitimacy of the program’s predator control activities.

Ask your legislators to stop the use of taxpayer dollars to indiscriminately and cruelly kill wildlife, and demand transparency and accountability from WS. 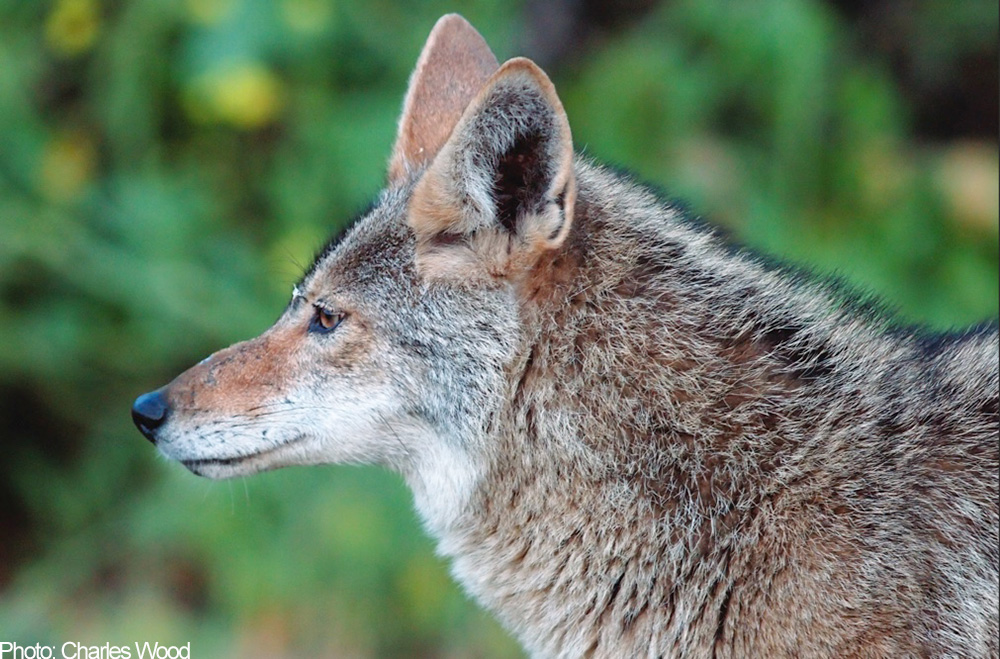 EXCERPT: Today, predators remain detested and feared on the range (Kellert 1985). The commissioners of Fremont County, Wyoming, e.g., fearing the spread of animals reintroduced to Yellowstone National Park, passed a unanimous resolution prohibiting the presence, introduction, or reintroduction of grizzly bears, wolves, or other “unacceptable species” within the county (Casper Star-Tribune, 3.12.02, e.g.). Nor are predators the only animals perceived as threats to ranching. Black-tailed prairie dogs, occupying 2-3% of their former range, are considered worthy of threatened status by the US Fish and Wildlife Service (USFWS 2000), yet continue to be poisoned and shot by ranchers and by government officials working on the ranchers’ behalf.