“Last Stand” celebrates the huge, heartfelt community effort to protect the threatened Memorial Oak Grove in Berkeley, CA.  An energized environmentalist community formed and grew, inspiring thousands of people to work to preserve these trees, planted as a memorial to World War I veterans, from destruction in order to build a gym.

On Saturday, March 17th, 2007, more than 150 oak tree defenders gathered for a TreeSpirit Project photograph.  After being threatened with arrest by campus police, about half chose to bravely, peacefully bare themselves despite the risk, in order to draw media attention to the cause of preserving this last remaining grove of mature coast live oak trees on the flatlands of Berkeley.

Tree sitters — some seen here dangling from branches high above the crowd — inhabited the oaks for over two years (!) to challenge the wisdom of further reducing dwindling green space in a city, and the sanity of destroying a healthy and cherished grove of trees to build a gym over an active (Hayward) earthquake fault.

News media covered the event (see below) and people around the world saw this unprecedented and historic, heartfelt gathering, and learned about the longest urban tree sit in history.

The legal case was eventually lost, almost 2 years after it started and most of these trees were then killed — but literally millions of people watched how much and many people care for community trees, treating them as living friends, not valueless objects.  Make no mistake: the consciousness-raising in The Memorial Oak Grove to this day helps inspire future efforts to preserve, protect and revere trees and forests everywhere. 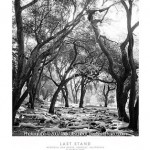 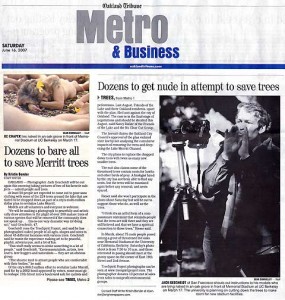 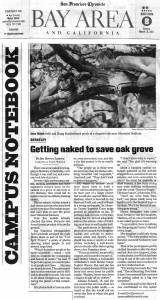 A Testimonial, long after this event:

Ah, Jack!  I miss the old days.  You know, around 2000 BC, when people were still living in trees and they could talk to the squirrels and blue jays; drink hot coffee from the International House Cafe; and read the latest newspaper sent up in their food bag.

And intrepid reporters would come from miles around to grunt and struggle up trembling climbing ropes to gaze with child-like wonder at the gentle humans who dwelt in the treetop eyries.

And twice, a spirit from another world walked quietly into the forest and inspired people to remove their protective garments and experience our collective vulnerability and deep connection to the ancient natural world, the magnificent irreplaceable trees, and the deep brown nourishing earth.  He captured our images on his magic picture-making device, and people around the world could feel our spirit.  They could feel our spirit!

Ah, Jack, the gifts you gave to me are indelibly etched in my memory:  your gentle but determined voice as you spoke to the community; your reverential silence as you gazed upon the canopy of leaf and limb; your smile as you saw people and trees connect as one; and your tears as you sensed what might be lost.     You are one of the most genuine and loving human beings I have ever met, and I will never ever forget you and what you did for us.